Where to Enjoy the Best Nightlife in Brussels

Enjoying the nightlife of a city is a great way to see the best of it.  Whether that means an evening at the theatre, a meal at a quality restaurant or the latest dance club, the city of Brussels has something for all tastes.

The former headquarters of the Guild of Bakers dates from the late 1600s and is now a great place for a meal or to sit on one of the terraces with its lovely views across the Grand Place in the heart of Brussels.  You can easily sit alone and enjoy a quality Belgian beer or take a companion for the evening and enjoy a light meal.  It is named after Charles II of Spain who ruled the Spanish Netherlands at the time that the guild was formed.

This is a perfect spot for jazz fans to visit as it offers live piano jazz during the week and full international jazz sessions most weekends.  It is in an area that is full of high fashion boutiques, just to the north of the Grand Place and is a favourite place for shoppers to stop at the end of their shopping trip.  After 5pm on Saturdays is even known as ‘Jazz After Shopping’ sessions.  The Art Deco style building is also worth checking out.

A bar called ‘Sudden Death’ may seem a little gruesome or perhaps a haven for heavy death metal fans.  But the reality is that it is named for a game of dice that was often played in the bar in an earlier era.  The building dates from the late 1920s and is a real Belle Époque style.  It is now also a top spot to try local Brussels and Belgian beers and wines as well as grab a bar snack or light meal.

If you love to visit a nightclub when away from home, then Fuse tops the list in the city.  This Brussels institution has become a famous spot among the techno scene and even has its own label, Fuse Records.  You can easily see underground talent, exciting experimentalists and also plenty of big name stars such as Daft Punk in the club and people travel from around Europe to visit it. 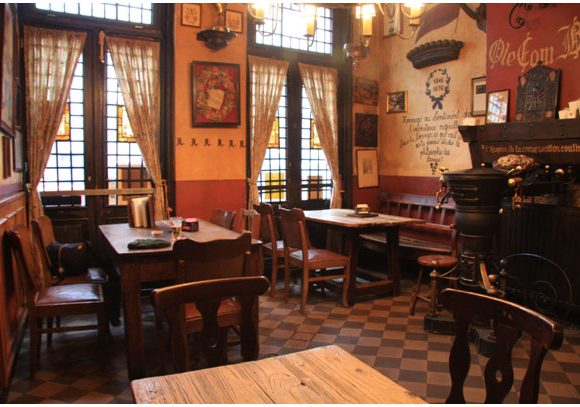 For a glimpse of Brussels of the past, this is the place to visit.  The bar was the haunt of surrealists such as Rene Magritte and the walls of the place are now lined with curios in these styles.  It is a little off the normal tourist route on Rue des Alexiens but if you like the history of a place as well as trying unique local beers such as the gueuze, then this is the place to go.

For those who like a nice rowdy pub for a night out, then the Delirium Café is the place to go.  Covering three floors and filled with beer memorabilia, the place is jumping most nights.  There are 30 beers on tap and over 2000 bottles available, so it is also the place for beer connoisseurs.  There is even beer-themed snacks available such as cheese and sausage and live music on Thursday nights.

This is a combination of club and cabaret with a bit of the classic freak show thrown in with its gaudy decorations.  It is something different for the nightlife of Brussels and offers something different nearly every night of the week.  That means check the website before you go to see what the theme of the evening is, or you might feel a little out of place!